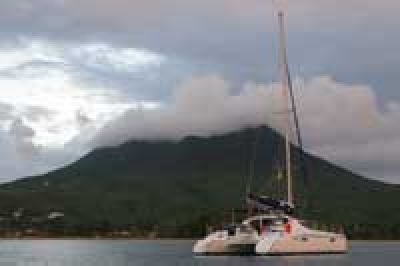 St. Kitts and Nevis are under the same governance but should not be considered similar beyond that. Nevis with a dramatically steep central volcano  rising more than 3000 feet high. Much of it is covered in rainforest, which is often shrouded in passing clouds. Up in these heights live many thousands of African green vervet monkeys, descendents of a few originally bought over by planters. The land between the mountains and the sea is gently sloping and fertile, planted mainly in sugar cane. This lower land is relatively flat and easy to drive on. Various battles between the British and the French slowed development until 1783, Nevis then came under British for an extended time. Settling came with trade and plantations flourished and there are many old plantations and sugar mills doting the island still today. Covered in dense forest and vegetation a visit to the Golden Rock Estate and take a stroll or hike into the rain forest on there well walk paths. Hiking around 2:30 will offer the best chance of seeing wild greenback monkeys. Return for a exotic beverage in the majestic garden setting of the estate after your hike. The Anchorages are dotted with moorings or Bareboats charters to pick up and beaches to the north west are the best and you can visit the many restaurants and beach bars using one of the many moorings along the coast.

Tweet
More in this category: « Dominica Anguilla »
back to top

Check What Boats are Available and Pricing

What's the worst part about Chartering? Having to type-in your resume, AGAIN - every time you go!  Seabbatical has teamed-up with the world leader in online training, NauticEd,

You'll love this... NauticEd maintains a cloud-based repository, with full security and privacy, so the latest version of your resume is always at your fingertips where you update it and easily share it with whoever you want to - such as Seabbatical!

NauticEd will give you 2 FREE sailing courses with your new account!